Many people take BART from SFO airport to the Embarcadero BART station and then catch a cab from the taxi stand at the Hyatt outside the station to their final destination. This is often a cheaper alternative than taking a taxi directly from SFO.

With the construction going on right in front of the hotel (the hotel is still open!), finding the cab stand a midst the massive equipment and street closures can be hard. The trick is taking exit A2.

Here's my step-by-step direction with photographs:


If there are no taxis when you reach California Street (highly unlikely), turn left and walk down California St to Davis. There's another taxi stand one block away between 9am and 3pm.

Here's the map showing the location of both taxi standards relative to the BART station: 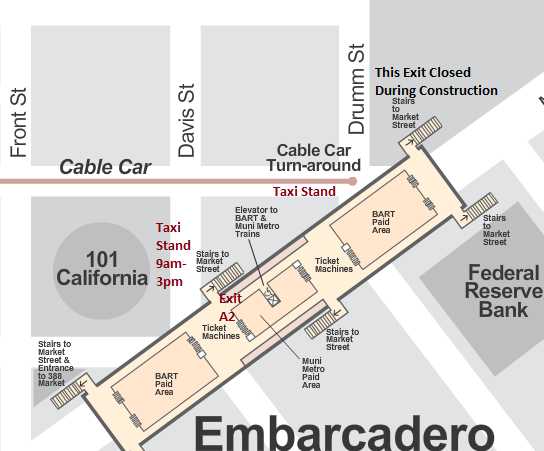 Email ThisBlogThis!Share to TwitterShare to FacebookShare to Pinterest
Labels: sf